Somehow, I’ve never managed to come up with holiday art gifts for my friends in time for the holidays.  I always seem to think of it the day before: clearly not enough time to create the gift, let alone give it.  This year is different.

In the past four days I’ve managed to create 10 (so far) mini (4×4) canvases and have already given one to a friend.  A small sampling: 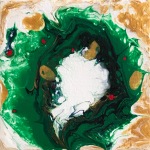 Now all I have to do is figure out how to get them packaged and into the mail in time.

The wild flowers growing by the rice paddies in Japan were really beautiful: many shades of pink and red and yellow, lots of different greens (grasses in front of and behind the flowers), stems and grasses at all different angles, and lots of depth. But how to paint those wild gardens…

My first attempt didn’t work very well, but in my frustration, I smooshed it (don’t you love it when I use these technical art terms?!?) and inadvertently created a painting that did work. That was my last post, but I knew I had to go back to my original idea of how to paint those wild gardens and try to create something I liked.

So voila; here is my second wild garden:

This is definitely better than my first attempt (the pre-smooshed version). But the pink flower in the upper right corner is the wrong color and way too big. Instead of pink this needs more varied reds. And ditto for the greens. I am starting to get the hang of the push-pull though.

So I said to myself, “Self, the next one will be better.” And so it is.

Hopefully, the next one will be even better.

Well, we’re back from Japan, I’ve organized my receipts/photos, etc., and started painting.  At the League I seem to still be fixated on the patterns in the water next to the boat on Lake Ashi. In my home studio, I’m moving along, playing with my fluid acrylics and dripping them onto canvas and moving the paint around with my fingers or a palette knife. It’s a whole new way of using acrylic and, so far, I’m loving it.

Once I did Mt. Fuji and a few of the flowers I saw in Japan (my last post), I decided to paint the wild flowers I saw near the rice paddies using a similar technique.  The goal was to show the intermixing of the flowers and the tall grasses, the push-pull of grasses behind flowers behind grasses behind … you get the picture. I wanted to create some depth, but not too much.

The first Wild Garden clearly was an experiment. I put down the yellow-green background and moved it around with my fingers to cover the canvas. Then I dripped the green stems, used the palette knife to create leaves and branches, dripped red flowers, blew on some to make them a little bigger, and finally moved some of the green stems over the flowers to create that feeling of depth, that push-pull.

Unfortunately, after all that effort, I didn’t like the way it looked.  Fortunately, the paint was still very wet so, in frustration, I just took my palette knife and smooshed everything vertically on the canvas. The end result was definitely weird, but promising.  So I added some more red flowers of varying sizes, moved some green stems/grass on top and added yellow dots for the centers on a few.  Still weird, but I liked it.  So this is the end result.

But I’m not giving up on my original idea of how to paint those beautiful wild flowers. Stay tuned.