Evolution of a Painting

I’ve done this before, written about the evolution of a painting.  But this time the image evolved and the medium changed.

It all started as a watercolor, one I wasn’t especially thrilled by:

I didn’t like the three lines on the left, I couldn’t seem to get any push-pull going, and the whole thing was pretty washed out.  Given that it was watercolor, anything else I could do to it would just make mud.

So I did the painting again on different paper, this time larger, and intending to fix the mistakes.

Frank O’Cain (my instructor at the League) said he liked the first, smaller watercolor better and that I should just paint over it again with acrylic (he actually said that’s what he would do).   Well, who was I to argue?  After all, I didn’t like either of them the way they were.

So the final acrylic painting: 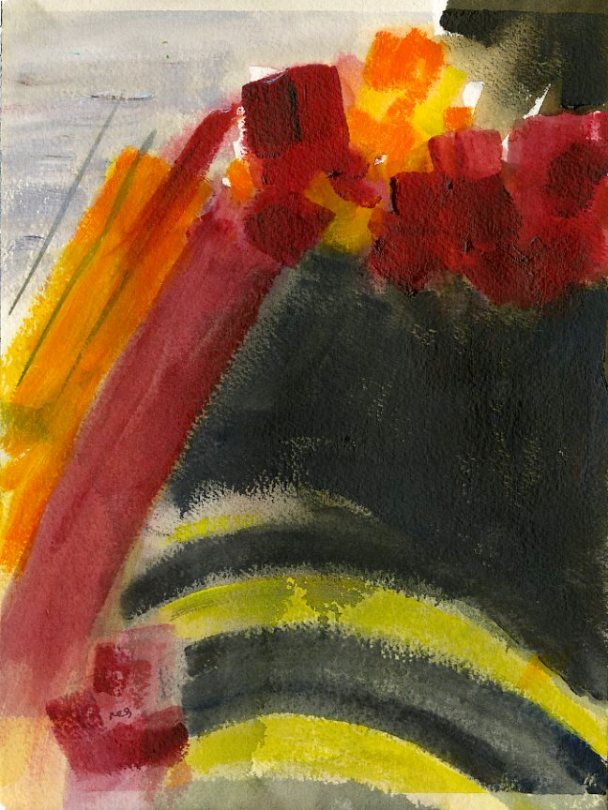 Well, it isn’t washed out anymore. Painting acrylic over a failed watercolor: I couldn’t completely get rid of the three lines on the left, but they are much weaker now. The red flowers  do seem to be coming forward.  And it’s certainly more interesting.

It’s better but still no cigar.  I guess evolution can only take you just so far.