Bruce Connor’s film at MoMA, Crossroads, was a real eye-opener. He took archival footage from the National Archives in Washington, DC  of the atomic bomb tests in the Pacific in 1946 and combined them into a 37 minute film. Again and again, from the sea, from the air, from the near-by Bikini Atoll, from near from far… you see the awesome power of those bombs going off: the blinding flash of white light, the expanding perfect circle of light on the water, the rising column and the expanding mushroom cloud, and finally the huge, rapidly expanding radioactive cloud at the base which inexorably envelops all the American naval ships placed there to observe and record.

And you see it well before you hear it. Light travels faster than sound. It’s eerily calm and quiet, watching it all happen, before the roar hits you.

The horror comes when you realize not one of those ships is moving away from the coming devastation, not one of them is even trying to escape the radiation.  How must they have felt, all those sailors, airmen, watching it race toward them?  The footage at the end of the film shows the last ship that disappeared into the cloud slowly reappearing as the cloud starts to dissipate. So at least some of the ships survived, if not all the people on them.

I went from MoMA to the Art Students League in a daze…and just started to paint.  No thinking, not much feeling … just a driving need to paint.  I’m going to have to keep painting, because it keeps waking me up in the middle of the night. 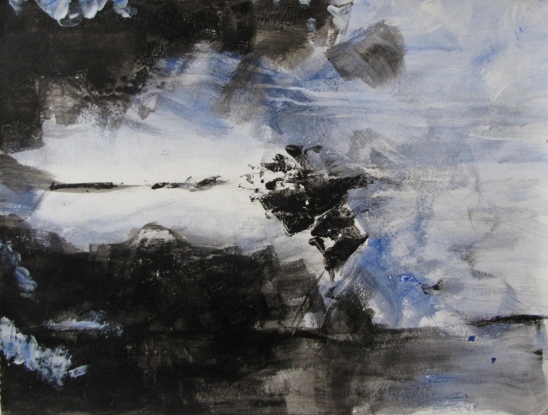 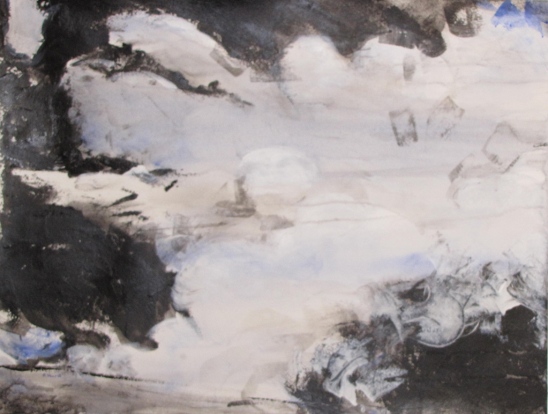 I have a third painting not quite finished.

Evolution of a Painting

I’ve done this before, written about the evolution of a painting.  But this time the image evolved and the medium changed.

It all started as a watercolor, one I wasn’t especially thrilled by: 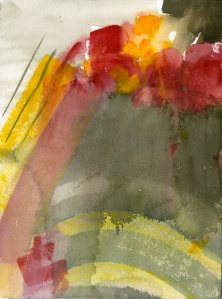 I didn’t like the three lines on the left, I couldn’t seem to get any push-pull going, and the whole thing was pretty washed out.  Given that it was watercolor, anything else I could do to it would just make mud.

So I did the painting again on different paper, this time larger, and intending to fix the mistakes.

Frank O’Cain (my instructor at the League) said he liked the first, smaller watercolor better and that I should just paint over it again with acrylic (he actually said that’s what he would do).   Well, who was I to argue?  After all, I didn’t like either of them the way they were.

So the final acrylic painting:

Well, it isn’t washed out anymore. Painting acrylic over a failed watercolor: I couldn’t completely get rid of the three lines on the left, but they are much weaker now. The red flowers  do seem to be coming forward.  And it’s certainly more interesting.

It’s better but still no cigar.  I guess evolution can only take you just so far.