A retrospective of my work

The September exhibit at The Interchurch Center is effectively a retrospective of my work, including 19 paintings of mine going back to 2000 : 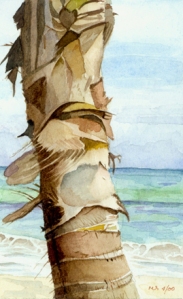 through the beginnings of abstraction in 2009 when I started zooming in on things,

through winter in New York City in 2011 when rocks next to the West Side Highway started looking like the Swiss Alps,

and paintings from my trip to Iceland in 2012 really started looking otherworldly,

to my current work on Yupo where rocks flow like water (based on a trip to China).

The exhibit will open Monday, September 8 and close Friday, October 3 (M-F 9am – 5pm), with a reception on Thursday, September 18, 5-7:30. Please come and join me at the exhibit at The Interchurch Center, 61 Claremont (120th Street one block west of Broadway) in Manhattan.  You can see more information about these and other paintings of mine at ruthhurd.com.

I started really being serious about my painting in Vietnam in 2008.

Sure, I had retired the end of 2007 which finally gave me real time to paint. And sure, a friend and valued painting coach had talked about setting goals, so I decided that I had to produce the equivalent of a painting a week. [There might be some weeks with nothing, but then there had to be other weeks with more, or a minimum of 52 per year.]

But it was the wonderful vacation to Vietnam, Cambodia, Hong Kong and Bangkok that my husband and I took in 2008 that got me really serious about painting.  It was 18 packed days, no time to paint, but boy did I take pictures!  And the minute I got back I started painting: 6 paintings of Angkor Wat and Tonle Sap in Cambodia, and 7 paintings of China Beach, Ha Long Bay, rice paddies and the Perfume River in Vietnam.  Just looking at those paintings takes me back…

And I’ve been looking at them because the Curator at The Interchurch Center in upper Manhattan (61 Claremont at 120th Street one block west of Broadway) has selected 4 of my Vietnam paintings to be in an exhibit there during September. Of course, he also picked 11 additional paintings based on other trips I’ve taken (most notably Iceland and China) and my travels within the US.

So it was the trip to Vietnam that started me on the path: traveling, photographing, and then painting. And here are two of my four Vietnam paintings which will be in the exhibit: 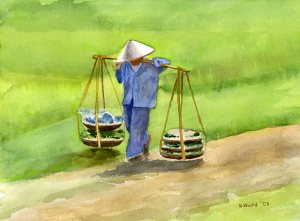 On the Perfume River

More about the exhibit as it gets closer.

Experiment, it’s what we do

Summer is the time when I really give myself permission to experiment, to try something new: new paper, new colors, new styles…and this summer is no exception.  Every week I have four days of four hour afternoons in Frank O’Cain’s class at the Art Student’s League where experimentation is encouraged. I’m not trying to produce the next masterpiece (although that would be nice).  I’m just trying to do something different.

First, I started fooling around with Yupo, that plastic paper (see my June blogs) and discovered it was really good for painting the rock formations and striations and reflections I saw in China.

It also worked really well for capturing the colors and feeling of Spain.

Then the alcohol based inks I had ordered from Jerry’s finally arrived and I experimented again, this time at home. What a mess!  Red ink all over everything (including my hands, my desk, my nightgown and, yes, the Yupo) before I finally figured out how to handle it.  When I was finished, the colors made me think of Imperial China…

Back at the League, I was having trouble with a painting of a bridge I saw in Ronda, Spain. Frank suggested I try Ching-Bor’s approach so I started flinging paint (see my last post for more of the gory details).

The result gave me a healthy respect for Paul Ching-Bor and the realization that I had better take his class at the League if I wanted to pursue this technique.

Somewhat chastened, I decided to focus on the unique and complex still life set up in Studio 12 at the League and try to just paint what I saw (sorta), albeit somewhat differently from my usual style. The results so far are somewhat of a mixed bag.

Two summer hats (on different days) and a beach ball later, would you ever think everything in this post was painted by the same person?  Ah, I love summer experimentation.