And here I thought I was done painting that impossibly high Icelandic waterfall, Skógafoss.  After all, I had done about 7 versions, and even posted about them in my previous blog, almost bragging about how much I liked the final (yes, final) version, Skógafoss V (hereinafter known as Skógafoss V v2).

Well, I was showing the actual painting to an artist friend when it suddenly hit both of us: our eye kept being drawn to the bottom center of the waterfall.  It wasn’t supercritical, but once I’d noticed it, I couldn’t un-notice it.

So I softened the two vertical strips of blue and added a little more white, and voilà, Skógafoss V (the really final version).

Hopefully, I can leave it alone now.

Almost two years ago on a trip to Iceland, I was greatly impressed with its many beautiful waterfalls. One of the most dramatic was the 62 meter high Skógafoss. We saw it first from the road a mile or so away, and then later up close and personal, getting wet from the mist at the base of the falls. Either way, it was awesome.

I’ve wanted to paint Skógafoss ever since, but didn’t know how. I poured over the pictures I and other people have taken, looked at the patterns in the flow of the water, and just couldn’t figure out how to do it justice.

Well, sometimes you just have to jump in.  So I started with a very plebeian, representational version (I didn’t plan on it being plebeian, it just ended up that way). Sometimes, on the path to the abstract painting I really want to do, I have to start with a representational one, just to get it out of my system.

And that initial representational painting often isn’t very impressive (as in this case), possibly because it’s not what I really wanted. But it did help me define the relative dimensions of the falls and start thinking about how to show the sheer power of the water…

So then I did an initial abstract watercolor sketch of the falls.  Not bad. With Skógafoss I, I really did manage to convey the massive height and force of the falls.

On the basis of that success, I decided to do a bigger version. Unfortunately, while I liked the colors, Skógafoss II had a number of problems, not the least of which was that the falls no longer looked so tall and massive.

So, a week or so later, along came Skógafoss III.

Well, the size of the falls relative to the size of the people is better, but this seems to be more about the rocks than the falls. I used a cheap 3″ bristle brush to do the white for the water which is a big improvement, but that one big dark blue rock on the right just jumps up and bites me.  And I can’t seem to wash it out any more.  Ah well, have to keep going…

So almost cutting to the chase, here is the “at one point I thought this was final” version: 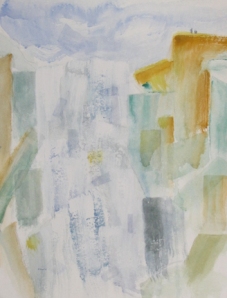 I liked it a lot and even got so far as to scan it into the computer (which is the only reason you can see it now).  But when I looked at the image on my computer screen, it really looked washed out and dull.  Aargh!!!

I couldn’t bear starting all over on yet another version, so I jazzed up some of the colors in the sky and the rocks, added more white to the water and then added dabs of color on top of the white.

So here is the final, final version. 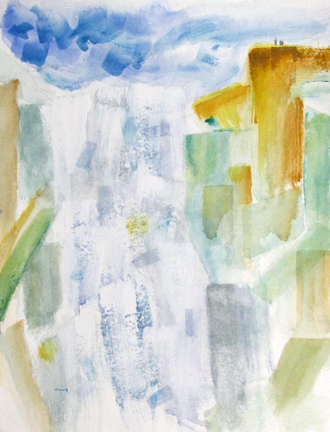 I’m a Sucker for Sunsets

Somehow, wherever I go, I end up with many (I mean many) pictures of sunsets.  There is something about the vibrant colors that just gets to me and says “paint me, paint me.”

But the problem is, what I often then paint is not abstract, because I seem to just paint what I see, and that is a real sunset, not an abstract one.  And what I want to do is paint an abstract sunset.  Aargh!!!

So, a friend recently came back from Socotra with some great photographs (she’s a very good photographer), including several sunsets.  I decided to do a representational painting of one sunset, and then try to create an abstract of the same photo.

Well, I haven’t been doing too many representational paintings lately and I’m a little out of practice.  It took me three tries to be happy with a painting of her Socotra sunset.

So, I finally had a representational version I liked.  But now came the really hard part: abstracting it. Two tries later I had something I liked. It’s actually painted on the back of one of my earlier failed Socotra paintings. (I do that a lot:  if something doesn’t work, I just turn the paper over and start painting on the other side.) 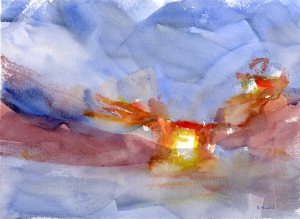