Exhibition coming — It would help to be organized

When I was working in Publishing I always thought I was pretty organized.  And I just reorganized my studio so I have room to work on large paintings (large, for me, is 18 x 24).  Everything looked so nice and neat and organized.

Well, less than two weeks later, my studio is no longer so neat and organized.  And I guess I’m not either.  In putting together the price list for Fall Exhibition 2013 for the 1100 Watercolor Society, it suddenly dawned on me that I still hadn’t scanned my large painting for the show.  Yeah, the one I matted and framed three weeks ago in a burst of energy and, I thought, really good organization.

So now I have to take it out of the frame to take a picture of it so I’ll have the image even if the painting sells.  And then put it all back together again. What a pain!

Oh, and while I’m at it, I just noticed I can’t find another painting I want to put in the exhibit.  I know I scanned it, because I have the image.  I was sure I’d framed it … so how hard can it be to find a framed painting in my studio?!?  Of course, if I’m wrong about having framed it ….  Aargh!!!

My scans are how I keep track of what I’ve done: how many paintings, what size, what price, what subject ….  It’s how I can see where I started and how far I’ve come.  It’s how I can track my transition from representational landscapes to non-representational abstracts, and everything in-between. And the scans and the accompanying spreadsheet are what give me the feeling (illusion?) of being organized.

Fortunately, I have a week before the exhibit to really get organized.

Oh, here’s the image of the painting I can’t find. 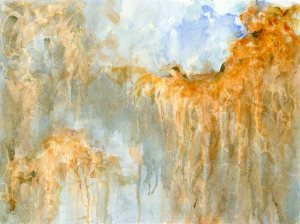 Language Is Leaving Me

I’ve never been all that interested in painting flowers, until I encountered Le Pen.   A friend introduced me last year to Le Pen, but it wasn’t until this summer that I decided to get to know it better.

Le Pen is a fine plastic-tipped pen made in Japan which comes in about 18 colors, all of which are supposed to not be water soluble.  Well, they are wrong about that as I will show, but it’s actually the ones that are water soluble that I love.  The four that seem to work the best are the ones that are the most water soluble: Brown (which is really a pinkish purple), Green (which is really a bluish green), Light Blue (which is cerulean-like) and Red (which is a cool, pinkish red).  I also bought and tried Blue, which doesn’t run in water at all. The Art Students League only has about 8 of them, so I may have to order a full set of 18 from Amazon.

So one day in June, my husband and I went to visit friends who live in Ossining, right on the Hudson River.  While admiring the flowers Diana had growing in her front yard, it suddenly occurred to me that it would be great to paint them (not my normal reaction).  Lacking any painting supplies, I snapped a few pictures with my phone to try and capture the tiny colorful flowers amid all those tall stems waving in the breeze.

In these three paintings, you can see how I used Le Pen. 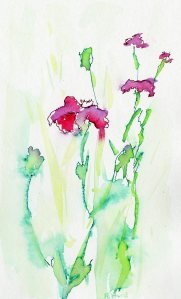 First I did a quick sketch of the flowers, stems and leaves using the Brown, Red or Green Le Pen.  I then painted the flowers, sometimes just adding water and sometimes adding a color or two.  Finally, I added water and occasionally a yellow green to paint the stems and leaves.  The results were a little too tight and didn’t reflect the flowers waving in the breeze, so I went back and moved the brush with water lightly up and down over the paintings. The good thing about Le Pen is that the colors move with water, even after the original sketch has dried.

I won’t say it’s painless because I have since done a number of “Florals” that didn’t turn out quite so well.  It’s actually hard to get the right mix of line and soft, blurred color.

These would make great cards, however, so I’ve loaded the images up on FineArtAmerica.com where you can order the cards.

These pens are perfect for plein air painting:  all you need is a watercolor pad, the pens, one brush, some water, and perhaps a small watercolor kit (optional).  The Wave Hill Blooms painting was done sitting on a bench in the Wave Hill garden.  I’m thinking I could use them for quick landscape sketches next month when I travel to China.  The downside is that I only have four colors that are really water soluble and work well.  I guess I’ll have to order the full set from Amazon to get more colors and hope that most of them will be water soluble.  I’ve tried using Dr. Ph Martin’s Hydrus watercolor inks but they don’t work as well: after it has dried, the color doesn’t move  when touched with a wet brush.