Nothing Is So Precious…

This story is the perfect illustration of Frank O’Cain’s statement that no painting should be so precious that you are afraid to try to improve it.  Or, the stupid things we do when we aren’t thinking.

I wanted to do a painting of the organic debris found in the water on Breidafjörður, Iceland.  The water was a sort of steel gray and there were  yellow and green and brown plant bits, plus foam, all swirled around together by the currents from the boats and the tide.  I got the painting to a certain point and then didn’t know what else to do with it.  It wasn’t finished, but …   I needed some Frank O’Cain expert advice.

In the meantime, on the off chance that this would be a before and after example for this blog, I scanned the painting (which I was then calling Debris). 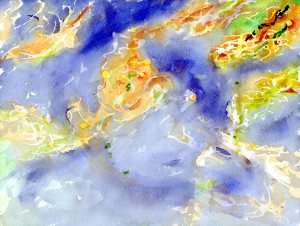 Ugh!  The colors in the scan were garish and I didn’t know what to do about that either. But looking at the scan made me realize some of the greens in the upper right corner were way too dark for the rest of the painting, so I decided to try and lighten them even before I showed it to Frank.

A little better, but the distorted colors in the scan were really awful.  Which meant that if I ever figured out how to fix this painting, I wouldn’t be able to put it on my website, because the colors would look all wrong.

Frank agreed I should continue to lighten the dark greens and then try to extend and intensify some of the lighter greens (emerald and olive) in the rest of the painting. 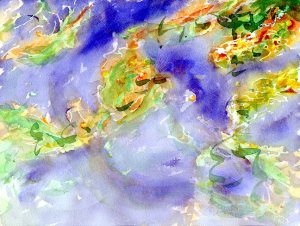 OK, the additional greens did help to unify the painting, but now some of them were too dark. Good thing this isn’t precious.

Then I  noticed a button on the scanner screen, “Color Restoration,” was checked. I tried unchecking it and Lo, and behold, my real colors were on the screen.  Who knew?!?  At that point, here’s what the painting really looked like.  One problem solved.

So I lightened a few of the greens … 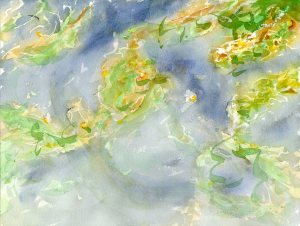 OK.  Coming down the home stretch.  Still something not quite right and still not sure what to do about it.  So I show it to some artist friends of mine.  A lot of discussion later, we all agree that I really have two smaller paintings that work, instead of one large one. So I decide to cut it up:  one horizontal 6h x 9w from the lower right corner, and one vertical 9h x 6w from the lower left corner.  After all, it’s not precious.

I turn the painting over, measure it on the back and cut it up.  Looking at the now smaller paintings, I realize my mistake:  I cut the vertical painting from the horizontal corner, and vice versa.   OMG, how could I be so stupid?!!!  Wait, is there a way to salvage this?  It seems like there might now be four paintings (called Currents I, II, etc.).

So, in no particular order, here are the resulting paintings … 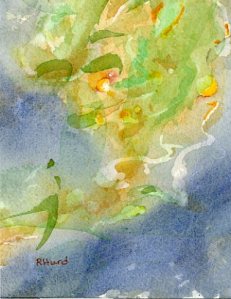 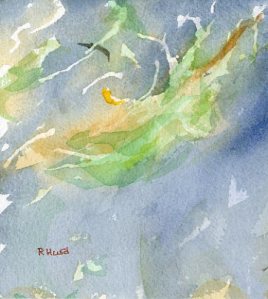 Whew!  Finally done.  And there’s one little piece left that I’m going to use as a bookmark.

But, one last look and … I’m not completely done after all.  A couple of these need some further adjustment if they are to stand on their own.  Maybe tomorrow, when I have more energy.

Looking back, I’m not sure I don’t prefer the pre-cut up larger painting.  Too late now. But that’s OK, it wasn’t so precious.

The many other colors of Iceland

Do you know what a fumarole is?  Or a mud pot? (Hint: it’s not a child’s sandbox after a downpour.)  Do you know how the English language got the word geyser?  Well, if you go to Iceland, you’ll get a crash course in geology, come across a lot of new words, and see terrain that looks as though it could just as well be on the moon.  Nothing average or ho-hum about it.

Námafjall is a high-temperature (dangerous: 80-100℃) geothermal area with fumaroles and mud pots.  Cold ground water seeps down to magma intrusions (Iceland is part of the volcanic “Ring of Fire”), where it is heated and transformed into steam and then comes back to the surface.  Along with the steam comes fumarole gas, which contains sulfur hydroxide responsible for that hot spring smell.  Sulphur deposits are formed when fumarole gas mixes with air.  Besides the sulphur deposits, a mixture of silica and gypsum forms around the fumaroles.  In mud pots, fumarole gas rises through surface water, producing sulphuric acid, which makes the water acid. Rock and soil dissolve in this acid water, producing the mud which bubbles up like the witches brew in Macbeth.  In the same geothermal area is Geysir, the original blasting hot (100℃) water spout after which all other geysers around the world are named.

And the colors are blue and brown, and sand and rust, and mustard and white, and charcoal and a kind of mauve. Nothing green at all.  So my first sketch…

captures some of that, as does my second painting of that area:

Though it’s an abstract, you’d be surprised how “realistic” Icelandic Fumaroles is.